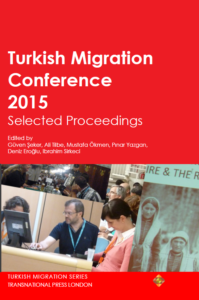 You can purchase paperback copies via the link below. Electronic copies of chapters are also available.

This volume brings together a selection of papers presented at the 3rd Turkish Migration Conference held at Charles University Prague, 25-27 June 2015.
This selection of papers presented at the conference are only a small portion of contributions. Many other papers are included in edited books and submitted to refereed journals in due course. There were a total of about 146 papers by over 200 authors presented in 40 parallel sessions and three plenary sessions at Jinonice Campus of Charles University Prague. About a fifth of the sessions at the conference were in Turkish language although the main language was English. Therefore some of the proceedings are in Turkish too.
The keynote speakers included Douglas Massey of Princeton University, Caroline Brettell of Southern Methodist University, and Nedim Gürsel of CNRS.