Exclusion and Inclusion in… 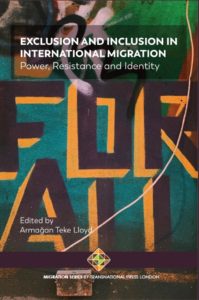 Exclusion and Inclusion in International Migration: Power, Resistance and Identity

“People on the move face new barriers in a globalizing world. Some of these barriers are related with the rise of an increasingly security-oriented approach towards international migrants. Notwithstanding the forces of globalization, states have maintained their monopoly power over whom to admit and whom to deny within their borders. In other words, they remain the sovereign authority regulating the entry and exit of people. However, in recent years, a number of states have singled out international immigration as the greatest political and social threat to their cultural and national security. The securitization of immigration is founded upon the premise that the international movement of people represents an exceptional risk for the survival of the nation and this is often associated with terrorism, instability and criminality. The securitization of immigration is also based on the idea that the ‘traditional’ authority vested in states to regulate immigration is somehow insufficient and needs to be enhanced. These assumptions correspond with a real policy shift in some countries such as the United States, where the government is planning to spend approximately 23 Billion Dollars on border security and immigration enforcement in 2019 alone.”

“This edited volume is an exploration of the global landscapes inhabited by refugees and labour migrants, although the focus is largely on the former. Despite the fact that most of the empirical studies are drawn from within Europe, the book also includes research on Nepal, Australia, the Middle East and Japan in order to reveal the truly global dimensions of migration and the regimes governing this.”

PART A: Ideology and Governance of Migration

CHAPTER 1. Coming to Terms with Liberal Democracy by the Populist Radical Right Parties of Western Europe: Evidence from European Parliament Speeches over Minorities and Migration by Caner Tekin

CHAPTER 2. ‘A Forest with many trees’ – Mapping migration governance and the dispersion of authority in Europe by Lisa Marie Borrelli, Rebecca Mavin and Giorgia Trasciani

CHAPTER 3. Policing Migrants in Transit and Upon Arrival: The Bordering Tactic of Integration in Austria and Germany by Olivia Johnson

CHAPTER 6. The Body and Embodied Experiences in the British Asylum System: Developing a Conceptual Perspective by Rebecca Mavin

Nikos Alamanos is a software developer. He received his BSc in Informatics & Telematics from the Harokopio University of Athens in 2013, and he holds an MSc in the area of Web Engineering also from Harokopio University of Athens. Since 2017 he is working at the R&D department of OTE Group telecommunications provider, and his research focus on energy efficiency, IoT and automation systems. He is co-founder of “Study in Greece” (http://www.studyingreece.edu.gr), the official web portal of Greece for providing information for studies for international students. The action is under the auspices of the Ministries of Foreign Affairs and Education, Research and Religious Affairs.

Lisa Marie Borrelli is a postdoctoral researcher within the nccr-on the move at the HES-SO Valais-Wallis, Switzerland. She completed her PhD at the University of Bern, studying ambivalent laws and emotions of street-level bureaucrats working on irregularized migration in the Schengen Area. During her PhD, she conducted a multi-sited ethnography with police and migration authorities in Italy, Switzerland, Germany, Sweden, Lithuania and Latvia. She has been a visiting researcher at the Centre for Migration Law at Radboud University, Nijmegen, and the Centre for the Study of International Migration at UCLA, supported by the Swiss National Science Foundation Doc. Mobility Grant (172228).

Almudena Cabezas is a Lecturer in Political Geography in the Department of History, Theories and Political Geography – School of Political Sciences and Sociology (Complutense University, Madrid). She is a Dr. in Political Science since 2008. Her lines of research are regionalisms, feminist geopolitics, Gender and Latin American Studies. She is a member of the ‘Space and Power’ Research Group in the Complutense University (Madrid).

Olivia Johnson is from Washington, DC and graduated from Duke University with degrees in political science and international comparative studies. She is currently a Ms in migration studies candidate at the University of Oxford where she focuses on deportation policies for FNOs in the UK.

Hari KC is a doctoral candidate in Global Governance at the Balsillie School of International Affairs, Wilfrid Laurier University, Canada. His research focuses on labour outmigration from South Asia with his PhD dissertation examining Nepal’s migration policy with a concentration on women migrants to the Middle East. He holds master’s degrees in English, and Peace and Conflict Studies, both from the University of Waterloo, Canada. Hari has received many prestigious awards: IDRC Doctoral Research Award, SSHRC Doctoral Fellowship, Ontario Graduate Scholarship, Helmut Braun Award, Beltz Award, Balsillie Doctoral Fellowship, and the Dean’s Award.

Evdokia Kogia is a Full-Stack Developer at a big Athens Firm. She is the project manager and main developer of RefConnect Project and since 2017 a member of “Study in Greece” (http://www.studyingreece.edu.gr), the official portal for studies in Greece. The action is under the auspices of the Ministries of Foreign Affairs and Education, Research and Religious Affairs. In the past, she worked as an IT teacher both in primary and secondary education and by volunteering in the School for immigrants and refugees of the Solidarity School of Mesopotamia, a movement formed by a group of Moschato’s citizens. She holds an MSc in Web Engineering from the Harokopio University of Athens.

Styliani Liberopoulou is a UI developer and designer. She completed her bachelor’s degree in Informatics & Telematics at the Harokopio University of Athens and a master’s degree in Web Engineering also at Harokopio University of Athens. Moreover, she is studying Digital Marketing in a master program of Business Centre of Athens (BCA). She is co-founder of “Study in Greece” (http://www.studyingreece.edu.gr), the official web portal of Greece for providing information for studies for international students. The action is under the auspices of the Ministries of Foreign Affairs and Education, Research and Religious Affairs.

Ana Carolina Macedo Abreu holds a bachelor’s degree in International Relations from Federal Fluminense University (UFF), Brazil, and is currently a graduate student at the Institute of International Relations of PUC-Rio, Brazil. She has volunteered at the Program of Assistance to Refugees and Asylum Seekers (PARES) of Cáritas-RJ between 2016 and early 2019, preparing eligibility research and providing legal assistance to refugees in Rio de Janeiro. Main research interests include critical humanitarianism, United Nations peacekeeping operations, forced migration and exceptionality. Ana is currently working on her Master thesis, entitled “Camps for protection, spaces of exception: the case of Protection of Civilians Sites in South Sudan”, inspired by Agamben’s theory of sovereign power and bare life.

Simeon S. Magliveras is an Assistant Professor of Socio-cultural Anthropology in the Department of Global and Social Studies at the King Fahd University of Petroleum and Minerals, Saudi Arabia. He has researched in Greece and Albania, in Southeast Asia, Laos and the Philippines, and the Kingdom of Saudi Arabia. The general focus of his research has focused on the movement of peoples resulting from political and economic upheavals and how ethnic and national identities are navigated and affected by the act of migration for both host and guests.

Rebecca Mavin is a PhD candidate and teacher at the University of Exeter, UK, and has previously studied at King’s College London. Her doctoral research focuses on individuals’ experiences of the asylum system in the UK, and in particular of the lived, embodied nature of claiming asylum. During her doctoral research, she conducted extensive fieldwork with asylum seekers and refugees in the UK, as well as with organisations working to support humanitarian migrants in England.

Christos Michalakelis is an Assistant Professor at the Department of Informatics and Telematics, Harokopio University of Athens, in the area of techno-economics engineering. His research interests focus on techno-economics in the area of ICT, mainly the IoT and cloud computing. He has participated in several projects in the area of ICT as well as in projects related to migration and the refugees. He is co-founder of “Study in Greece” (http://www.studyingreece.edu.gr), the official web portal of Greece for providing information for studies for international students. The action is under the auspices of the Ministries of Foreign Affairs and Education, Research and Religious Affairs.

Vasileios Pierros is a software developer focusing mainly on large scale backend systems. He received his BSc in Informatics & Telecommunications from the National and Kapodistrean University of Athens where he also received an MSc in Bioinformatics. He holds another MSc in Web Engineering from the Harokopio University of Athens. His current research focuses on parallel systems, proteomics and machine learning.

Ana Santamarina is a PhD fellow in the Human Geography Researching Group at the University of Glasgow (UK). She did a Master of Research in Human Geography in Glasgow after completing her studies in Political Science and Law in the Complutense University of Madrid (Spain), where she was granted with the extraordinary prize of her cohort. Her lines of research are race, space and politics, focused on grassroots urban resistances. Her research is funded by the Urban Studies Foundation (UK).

Miguel Santos Neves holds PhD from the London School of Economics and Political Science (LSE), MPhil in Development Studies and Economics from the Institute of Development Studies (IDS), University of Sussex, and BA in Law from the University of Lisbon. Associate Professor of International Law and International Relations at Universidade Autónoma de Lisboa, Director of the Network of Strategic and International Studies (NSIS), a private policy-oriented research think tank. Between 1995 and 2013 was the Head of the Asia Programme and Co-ordinator of the Migrations Programme at the Institute of International and Strategic Studies in Portugal (IEEI).

Caner Tekin is a teaching fellow in history at the Ruhr University Bochum, where he has recently received his doctoral degree. He worked previously at the Georg-Eckert Institute for International Textbook Research in Brunswick as a postdoctoral fellow. His recent publications include the monograph Debating Turkey in Europe: Identities and Concepts (Berlin: De Gruyter, 2019) and the volume co-edited with Stefan Berger, entitled History and Belonging: Representations of the Past in Contemporary European Politics (New York: Berghahn Books, 2018).

Tamaki Watarai is Associate Professor of Brazilian Studies at Aichi Prefectural University, Japan. Her research focuses on the racialization of female migrants, especially Japanese immigrants, in Brazil and Brazilian migrants in Japan. She is currently studying Brazilian caregivers in Japan and France to explore how unskilled Brazilian female migrants use their sources of cultural capital, some of which correspond to stereotypical images of Brazilian women, to develop career plans even under unfavourable working conditions.