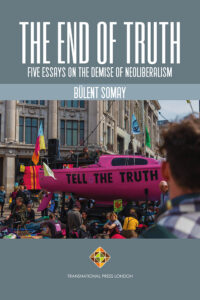 Five Essays on The Demise of Neoliberalism

What seems to be happening throughout the last decade is the gradual invalidation and dissolution of what we used to call ‘Truth’, and hence the disruption and gradual dissolution of what Foucault had called the existing hierarchical “Regime of Truth”. What remains is not what Marx had hoped to be a more egalitarian regime in which “the educator{s themselves are also] educated”, but rather a ‘Humpty Dumpty Regime’, where ‘Truth’ is whatever the Humpty-Dumpty in power wants it to be. This book argues that this is an unmediated outcome of the profound social, cultural and economic crisis of neoliberal capitalism, and its political corollary, the meteoric rise of populism and authoritarianism, not only in the so-called ‘developing’ countries, but throughout the entire globe.

Bülent Somay is born in Istanbul and had his BA and MA degrees in English Language and Literature, and PhD degree in Psychosocial Studies. He was a Lecturer in Comparative Literature and Cultural Studies in Istanbul Bilgi University between 2000 and 2017. He has published seven books in Turkish (Cinselliğe Dair Vazgeçmemiz Gereken Yüz Efsane [A Hundred Myths on Sexuality We Need to Give Up], 2016; Tarih, Otobiyografi ve Hakikat [History, Autobiography and Truth], 2015, ed.; Çokbilmiş Özne [The Subject Who Knows Too Much], 2008; Bir Şeyler Eksik [Something is Missing], 2007; Tarihin Bilinçdışı [The Unconscious of History], 2004; Şarkı Okuma Kitabı [Song Reader], 2000; Geriye Kalan Devrimdir [What Remains is the Revolution], 1997), and two books in English (The View from the Masthead, 2010; The Psychopolitics of the Oriental Father, 2014). His most recent publication is Something is Missing: Things We don’t Want to Know about Love, Sex and Life, published by Transnational Press, London, 2021. He is recently living in exile as an Academy in Exile fellow in Freie Universität, Berlin.