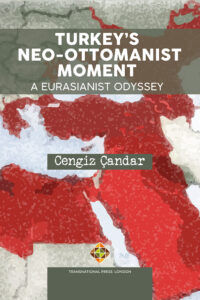 Turkey’s Neo-Ottomanist Moment, A Eurasianist Odyssey, is the most comprehensive account to date of the transformation of Turkey’s foreign policy related to its regime change. With first-hand knowledge, Cengiz Çandar tells the story of the emergence of Recep Tayyip Erdoğan’s revisionist Turkey in global affairs. References from almost 90 different names from around 20 countries, he also reflects how the international expertise on Turkey viewed Turkey.

“Cengiz Çandar has written a thought provoking and tremendously insightful book on contemporary Turkish foreign policy rooted in a deep understanding of Turkish history and politics. Çandar’s insights are grounded in experiences as a journalist and foreign policy advisor. This book goes a long way to explain Turkey’s strident foreign policy today. It is a wonderfully informative and enjoyable read!”

“No one  better understands and  explains “Neo-Ottomanism” than Cengiz Çandar, who coined the term almost 30 years ago, long  before it became a fashionable concept capturing the evolution of Turkish foreign policy. And very few writers can so beautifully weave professional insights,  objective analysis and anecdotal flair. By transcending easy clichés and lazy analogies,  Çandar has produced a definitive account. If you could only read one book on Turkish foreign policy , this is it.”

“In his new book, Turkey’s Neo-Ottomanist Moment: A Eurasianist Odyssey, Cengiz Çandar, a veteran foreign policy analyst, advances a lucid explanation of his country’s increasingly assertive behavior. His seemingly paradoxical conclusion is aptly encapsulated in the book’s title. Çandar’s book is an intellectual tour de force and a must-read for anyone interested in the intertwined problem of contemporary Turkey’s identity and foreign policy.”

Cengiz Çandar, scholar and journalist, is the leading expert on Turkish foreign policy, the main architect of the Turkish-Kurdish rapprochement as President Turgut Özal’s advisor in the 1990s. Author and contributor of several publications in Turkish and English on Turkey, the Middle East and international relations, a co-author Turkey’s Transformation and American Policy, New York, 2000 and The United States and Turkey – Allies in Need, New York, 2003, both are Century Foundation publications and The Future of Turkish Foreign Policy, MIT Press, 2004. His Turkey’s Mission Impossible, War and Peace with the Kurds published in the U.S. in 2020. Çandar is Distinguished Visiting Scholar at the Stockholm University Institute for Turkish Studies (SUITS) and Senior Associate Fellow at the Swedish Institute of International Affairs (UI).