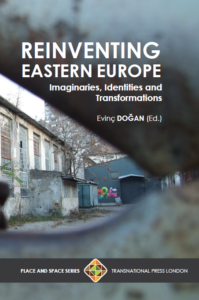 This edited collection brings together a wide range of topics that shed light on the social, cultural, economic, political and spatio-temporal changes influencing post-socialist cities of Eastern Europe. Different case studies are presented through papers that were presented at the Euroacademia International Conference series. Imaginaries, identities and transformations represent three blocks for understanding the ways in which visual narratives, memory and identity, and processes of alterity shape the symbolic meanings articulated and inscribed upon post-socialist cities. As such, this book stimulates a debate in order to provide alternative views on the dynamics, persistence and change broadly shaping mental mappings of Eastern Europe. The volume offers an opportunity for scholars, activists and practitioners to identify, discuss, and debate the multiple dimensions in which specific narratives of alterity making towards Eastern Europe preserve their salience today in re-furbished and re-fashioned manners.

“Twenty-five years have passed since Larry Wolff’s Inventing Eastern Europe opened our eyes to the manner in which the concept of the region was created. With the temporal distance since the dissolution of the Soviet Union and Yugoslavia, we can begin to assess this invention anew, which is what the essays in Reinventing Eastern Europe do, with their close readings of individual moments and phenomena across the region. Focusing on place and space and its relation to identity, this collection of essays reassesses the impact of the various transformations in the region over the past several years, in order to understand how these changes have contributed to the reinvention of the area, both in terms of a re-conceptualisation from the outside, as well as an attempt for these various locales and peoples to reinvent and define themselves, following ruptures in economy and state, as well as war. This fine collection of essays contributes a fresh and nuanced understanding of the specificities of the region, demonstrating how its complexity makes it a continual challenge to scholars to capture in one glimpse.” —Professor Amy Bryzgel, Personal Chair in Film and Visual Culture, University of Aberdeen

Dr Evinc Dogan is an Assistant Professor at the Faculty of Tourism at Akdeniz University, Turkey. She holds a PhD in Management and Development of Cultural Heritage from IMT School for Advanced Studies Lucca, Italy. She received an MSc in History of Architecture from Istanbul Technical University and BA in Tourism Management from Bogazici University, Turkey. She is the author of Image of Istanbul: Impact of ECoC 2010 on Rebranding the City.