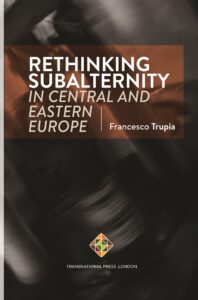 At a time when the region of Central and Eastern Europe is considered a dominant example of democratic backsliding with authoritarian tendencies, this monograph aims to provide a critical approach to minority issues. By carving out the philosophical implications of the notion of subalternity, Trupia draws particularly on Antonio Gramsci’s philosophy of praxis and his scholarly legacy in order to debunk societal models of liberal multiculturalism and their hegemonic discourse. This monograph is not only an attempt to unravel power-centred fabrication of subordination resulting from hierarchic methods of doing politics and imposing cultural ascriptions upon certain segments of society. It also deals with subalternity as a “perspective of opportunity” through the lens of complex identity positions of minority groups and their changes through time.

Part I: GENESIS, MATERIALISATION, BOUNDARIES, AND MEANINGS OF “MINORITY” AS SUBALTERN OTHERNESS

Part II: THE MAKING AND THE RE-MAKING OF SUBALTERNS: A GRAMSCIAN PERSPECTIVE

Francesco TRUPIA holds a PhD in Philosophy from Sofia University “St. Kliment Ohridski”, Bulgaria. Since 2014, he has mainly worked as a researcher in Armenia, Bulgaria and Kosovo for international think-tanks and as a NGO practitioner. His research interests lie in Political Philosophy and Theory of Politcs with regard to contested identities of minority groups and radical democracy in post-Communist countries.