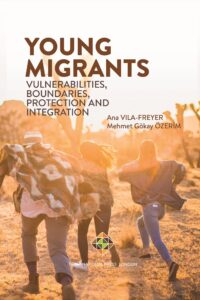 “This book is the product of a fascinating conference held in Bari, Italy, in June 2019. Viewing the content of the collection of chapters included in the book, one can discover that, in that conference, presenters and organisers implicitly heed Dobson’s invitation (2009) to unpack children [and youth] in migration research. Doing this, contributors successfully overcame two kinds of “adultist constructions” (Holt & Holloway 2006) that are typical in the literature about international migrant children. First, the perspective that overlooks children in migration research simply because they are not “migrants”, they are “things”, “objects” or “suitcases” carried by their parents or other adults. In the collection of contributions gathered by Ana Vila-Freyer and Gökay Mehmet Ozerim, readers will discover exactly the opposite: children and youth are migrants. Instead of being “objects”, children and youth circulate, produce mental maps, have educational purposes while moving from one country to another. They build their own forms of understanding about the role and the duties of their legal guardians when they move unaccompanied and separated from their parents; they also talk about their own experiences. These children produce their narrative about what international mobility means for them; they even create their identities referring to different heritages, languages and feelings. In some cases, they are proud of their origins while accommodating the changes for acquiring new nationalities.”

Tanja DEJANOVA is currently completing a Postgraduate Award in Cognitive Behavioral Therapy at the University of Liverpool. Having earned an MA in Forensic Psychology from John Jay College of Criminal Justice in New York City, she has worked with and studied at-risk and in-need populations both in and outside of the criminal justice systems in Europe, the United States, and Mexico. In addition to her background in the social and behavioral realms of criminal justice, Ms. Dejanova’s work is informed by a strong belief in equality and the power of crossing cultural and educational barriers.

Halina GRZYMAŁA-MOSZCZYŃSKA is a full professor in Psychology of Culture and Religion at the Institute of Psychology in Jesuit University Ignatianum in Cracow. She has earn her degree in clinical psychology and psychology of culture and religion. She is also visiting professor at research centre at Innlanded Sykehuset at Hamar ( Norway). Since 1990 she conducts research in Poland among refugees and in local communities in which refugees camps are located. Since 2019 she is a President of the International Association for the Psychology of Religion. She serves on the editorial boards of several professional journals and has taught courses in various European US and Asian universities.

Sara JORDENÖ is a documentary filmmaker, visual artist, researcher and an Assistant Professor at the Rhode Island School of Design (RISD). Jordenö’s cross-disciplinary and longitudinal projects studies social movements with a focus on communities facing different forms of marginalization, such as unaccompanied minor refugees in Sweden and LGBTQ youth of color in NYC. Jordenö’s video installations and films have been shown internationally. Her documentary film KIKI has been featured in over 200 festivals around the world and was released in theaters in the US, Sweden and the UK. Jordenö is the recipient of prestigious awards such as the Art Matters award, the Teddy Award for Best Documentary Film and the Kathleen Bryan Edwards Award for Human Rights.

Weronika KAŁWAK, PhD, from Jagiellonian University, Institute of Psychology, Kraków, in 2018. Her thesis concerned epistemological, institutional and methodological aspects of pain diagnosis, as well as experience and practices of medical doctors. Her scientific interests include the use of qualitative methods in various research areas of psychology, theoretical dimensions, ethical aspects and philosophical origins of qualitative methodology. In her research, she has adopted phenomenology and hermeneutics in cognitive science and experimental philosophy, critical health and social psychology, or research and development. Now she starts a new critical ecopsychological project on the problem of climate depression.

Sirkka KOMULAINEN has a background in social research since the early 2000s. She obtained her PhD in Sociology at the University of Surrey, Guildford in 2004 in Childhood Studies field with critical work on children’s voices and minority group rights. She is currently based at South Eastern Finland University of Applied Sciences as a senior Research Manager. She has published internationally on childhood/youth and immigrant integration matters.

Chiara MASSARONI is a Doctoral Student in Sociology at the University of Innsbruck, Austria, and member of the Doctoral School “Dynamics of Inequality and Difference in the Age of Globalization”. Her work focuses on the identity negotiation of young migrant children living in Morocco. She also works as a consultant and is currently collaborating with UNODC and UNESCO on a project related to children’s education. Prior to her PhD she completed a Master in International Relations in Rome, Italy, and worked for ten years with NGOs in Europe, Africa and Latin America in the field of children’s education and inclusion

Liliana MEZA GONZÁLEZ graduated with honors from the Technological Institute Autonomous of Mexico (ITAM) from the Economics Master and Undergraduate. She also studied a Masters and a Ph.D. in Labor Economics at the University of Houston. Dr. Meza has published more than 40 articles, book chapters and policy briefs in topics related to the Mexican labor market and Mexican International Migration. Currently she is a Researcher at the National Institute for Statistics and Geography (INEGI) and a part-time professor at the Universidad Iberoamericana. She has been part of the National Research System (S.N.I.) since 1999.

Irasema MORA-PABLO is a full-time teacher at University of Guanajuato, Mexico, in the Language Department. She currently teaches courses in the area of English teaching and applied linguistics. She holds a PhD in Applied Linguistics by the University of Kent, UK. Her teaching experience in university levels and her own learning experience have shaped her areas of interest: Bilingualism, Identity formation, Second language Acquisition and native and non-native teachers

Marisol NAVAS is Professor of Social Psychology at the Faculty of Psychology and research member and Secretary of the Centre of Migratory Studies and Intercultural Relations, at the University of Almeria. Her areas of expertise include intergroup relationships, prejudice, stereotypes and discrimination, as well as acculturation and adjustment processes of immigrant populations (adult and adolescents) from different ethno-cultural origin. Professor Navas has published widely in scientific national and international journals (JCR indexed) and books, and has an extensive experience in leading and managing national and international research projects about these topics.

Pedro Paulo ORRACA ROMANO holds a PhD in Economics from the University of Sussex. He worked as Project Support Assistant at the London School of Economics, as Deputy Director at Mexico’s City Ministry of Finance, and as Professor of Economics at the Universidad Autónoma de Baja California. His work has been published in Oxford Development Studies, Review of Development Economics, Latin American Economic Review, Social Science Journal and Journal of Borderlands Studies. His main research interests are labor economics, development economics and international migration. He is currently Professor at the Department of Economics Studies at El Colegio de la Frontera Norte

Mehmet Gökay ÖZERİM is a member of the International Relations Department, and the Director of the European Union Research Center at Yaşar University, Turkey. His main study fields are international migration, youth, security and European integration process. Dr. Ozerim was awarded the Chevening Scholarship of UK Government in 2010 and carried out a part of his researches in the University of Oxford. In 2014, he has been at the Institute of European Studies in University of California, Berkeley as a visiting scholar. He has been also working in several European Union funded projects and delivering trainings on youth participation and project management since 2006. In 2019, Dr Özerim was awarded a Jean Monnet Chair on migration by the European Commission.

Amber HORNING is an Assistant Professor in the School of Criminology and Justice Studies at the University of Massachusetts, Lowell. For the last nine years she has researched commercial sex markets, human trafficking and forced migration. She has extensive fieldwork experience with hidden populations and conducting qualitative studies. Additionally, she has led research studies in international settings, such as South Africa and Sweden. She has published in journals, such as Deviant Behavior, Sociological Perspectives, and Dialectical Anthropology. Dr. Horning has an interdisciplinary background and she uses innovative mixed-methods approaches, and she publishes her work both nationally and internationally.

Omar SERNA-GUTIÉRREZ holds a bachelor’s in TESOL and a master’s in applied linguistics for ELT, both from the University of Guanajuato. His research interest includes transnationalism, return migration, and funds of linguistic knowledge.

Paulina SZYDŁOWSKA is PhD candidate at the Institute of Psychology at Jagiellonian University in Cracow. Her research interests are related with cultural, social and developmental psychology. She conducts the research using cualitative approach about acculturation of Polish adolescents and their parents living in Spain but she also worked in a project related with returning child migrants situation. Beside the academical context, she works as a clinical child psychologist.

Ana VILA-FREYER holds a PhD in political science from Université de Montréal and is professor-researcher at Universidad Latina de México. Her research focuses on composed identities and multiple belongings developed by young Mexicans settled regularly or irregularly in the US or returning to Guanajuato, central Mexico. She has been part of the National Research System (S.N.I.) since 2017.