Women of Kurdistan: A…

Women of Kurdistan: A Historical and Bibliographic Study 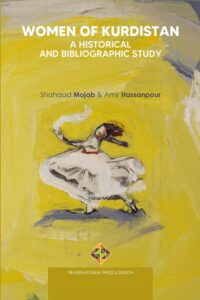 Women of Kurdistan: A Historical and Bibliographic Study

By Shahrzad Mojab and Amir Hassanpour

Women of Kurdistan: A Historical and Bibliographic Study documents a century long history of Kurdish women’s struggles against oppressive gender relations and state violence. It speaks to bibliographic silences on Kurdish women; silences that are systemic and structured, with many factors contributing to their (re)production. The book records extensive literature on violence perpetrated by the family, community, and the state as well as presenting the reader with a vibrant archive of resistance and struggle of Kurdish women. The analysis avoids the fashionable state-centered scholarship, which purifies processes of nation-building, state-building, and disguises their violence. The image depicted of the women of Kurdistan in this bibliography is shaped also by the languages we have chosen: English, French, and German. It is a record of material in languages that are not spoken by the majority of the Kurds. It will, therefore, be different from a bibliography of works in the Kurdish language, which have a majority of Kurdish authors, with more entries on topics such as poetry, fiction, education, and arts.

“Love and learning made the making of this bibliography imaginable. It began more than 20 years ago when Amir was expanding his theoretical ground for class analysis of nationalism and peasant movement in the Kurdish region of Mukriyan (Hassanpour, 2021). Simultaneously, I was engaged with debates on Marxist feminism and transnational feminism while grappling with post-al tendencies in feminism such as post-colonialism, post-structuralism, and post-modernism. We wanted to better understand the explanatory power and political implications of Marx’s dialectical historical materialism in explicating the intersecting and refracting relations of gender, class, race, culture, nation, and nationalism. This commitment, nonetheless, did not remain in the realm of epistemology as a disembodied intellectual exercise. As a member of a dominant nation–a Shirazi born Iranian–I wanted to critically confront this national “identity” and the sense of “belonging.” Amir sought to scrutinize patriarchal structures and gender relations in Kurdish history, society, culture, and nation. This intertwined mind and heart desire put us onto a path of renewed discoveries of our personal and intellectual relations. In a nutshell, this was the beginning of the making of Women of Kurdistan: A Historical and Bibliographic Study.”

Women of Kurdistan provides a meticulously researched source book for readers interested in women, gender, and sexuality in Kurdistan and the Middle East. It covers a wealth of bibliographic material, including both scholarly and non-academic publications, many of which have not previously been accessible to broader audiences. But Women of Kurdistan is more than a source of information. It is also an eloquent reflection on the entanglement of knowledge production and political power, and a call to recognize scholarship’s potential in shaping historical change. Above all, it is a passionate statement about the impossibility to comprehend the intersection of colonial, capitalist, and nationalist forces without attention to women’s lives and struggles.

Women of Kurdistan is simply an excellent template for how to chronicle women’s resistance politics. By framing the Kurdish women’s struggles within a historical materialism under different modes of production and discussing the political influence of five different nations on the Kurdish peoples, the authors offer a rich context that surpasses the common fetishization of women’s armed resistance. Internationally known for their Marxist and feminist works, Mojab and Hassanpour apply theories of nationalism, capitalism, peasantry, knowledge production, and relationship between state and non-state to understand the Kurdish experience, while honouring the struggle, voice, and poetry of Kurdish women activists. The book is as unapologetically critical of regional and religious hegemonies as it is of Kurdish patriarchies and is candid about the slipperiness of the concept of the “ideal Kurdish woman,” while skeptical of the benefits of transnationalization for the women honoured in this book.

PART I. THE MAKING OF THE BIBLIOGRAPHY

Shahrzad Mojab, a scholar, teacher, and activist, is internationally known for her work on the impact of war, displacement, and violence on women’s learning and education; gender, state, migration, and diaspora; and Marxist feminism and anti-racism pedagogy. She is a professor of Adult Education and Community Development as well as Women and Gender Studies at the University of Toronto. She is the Director of Critical Studies in Equity and Solidarity; a former Director of the Women and Gender Institute, University of Toronto; and the recipient of the Royal Society of Canada Award in Gender Studies in 2010 along with the 2020 Canadian Association of Studies in Adult Education Lifetime Achievement Award. She is the editor of the Peter Lang Publishing book series on Kurdish People, History and Politics. Her most recent books include Youth as/in Crisis: Young People, Public Policy, and the Politics of Learning (co-edited with Sara Carpenter, 2017); Revolutionary Learning: Marxism, Feminism and Knowledge (co-authored with Sara Carpenter, 2017); Marxism and Feminism (editor, 2015); Educating from Marx: Race, Gender and Learning (co-edited with Sara Carpenter, 2012) and Women, War, Violence, and Learning (editor, 2010). Her current research projects are Youth in Transition: War, Migration, and ‘Regenerative Possibilities’ and The Pedagogy and Policy of Refugee Youth Resettlement. The Ontario Arts Council has funded her project with Roshanak Jaberi and Doris Rajan, No Woman’s Land, which is a dance project to capture the experience of refugee women of sexual violence.