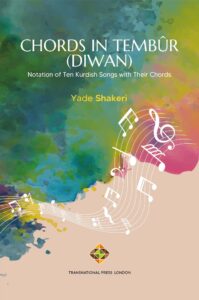 Notation of ten Kurdish songs with their chords

I have always had in mind to write a book on numerous performable chords on the long-neck Tembûr which is known by various names in different parts of Kurdistan; it is known as Tembûr in the northern and western Kurdistan, it is known as Diwan in the eastern Kurdistan, and in the southern part of Kurdistan it is called Saz. However, the Turkish people use the word Baghlama to refer to the above mentioned instrument. Some years ago, I strove to do something i n this field which culminated in writing a book and, due to some reasons, I refused to publish it. During the last two months, I aimed at editing and adding some supplementary parts to it. Moreover, ten Kurdish songs along with displaying their chords have been pieced together. It should be noted that the book does not include the entire Diwan chords because I have attempted to write those chords that are more used in this instrument. I hope this book will be used by art lovers and Diwan players to enable them to improve their playing techniques. I wish you enjoy playing them.

Yade Shakeri is a Kurdish singer and Diwan player born in 1977 in Sinedij (Korsan), the Eastern Kurdistan. He has produced two albums and a lot of other single tracks. Moreover, he has translated a book on singing into Kurdish and written another book about Diwan.