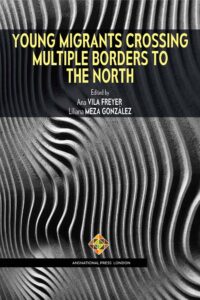 Our focus on youth migration aims to unfold the theoretical and political constraints at play for these young migrants as they defy borders and national boundaries on their northbound journey. By placing the emphasis on young persons, this volume seeks to ponder on the challenges their movement is positing to governments and societies of the countries they are crossing by or settling in. Our goal is to go outside the perspectives constructed from a labor, adult-centered, breadwinner and family-head perspective. We recognize that the conditions that force them to flee uncertain economic conditions or to seek personal security may intersect, but by focusing on young migrants as actors in search of a decent and fair life, as well as on the hopes and resilience that every young person has, the point of view diverges. As they may be permanent or transit sojourners in local communities, we also propose to include the spaces, as the social and political communities reacts to this youth mobility.

The chapters contained herein follow the migrant’s movement from South to North. Therefore, the authors focused on the analysis of several emerging issues in the migration dynamics in North America.

Rodolfo Cruz Piñeiro is the Director of the Department of Population Studies and Editor of Journal Migraciones Internacionales at El Colegio de la Frontera Norte. He holds a PhD in Sociology from the University of Texas in Austin and is a member of the Mexican National Research System since 1992. He has been President of the Mexican Society of Demography and a member of the Consultive Council of the National Institute of Migration, among others.

Tania Cruz Salazar is a social anthropologist and researcher at El Colegio de la Frontera Sur, and member of the Mexican National Research System. She was a Visiting Scholar and Postdoctoral Researcher in the Latin American and Latino Studies Department at the University of California, Santa Cruz, and a Visiting Professor at the Latin American Institute of the Free University of Berlin in 2008. Her research focuses on Youth Identities, Youth Migration, Embodiment and Gender.

Nicole Dubus is a licensed clinical social worker in California and Massachusetts, with almost 30 years of licensed clinical experience. She has worked in private social service agencies; health and behavioral centers and hospitals; as well as county and state agencies.  She is an associate professor in Social Work at San Jose State University, San Jose CA. Her research has been international and primarily focused on the health and behavioral health needs of refugees and forced migrants, and culturally effective practice for these populations.

Ana Escoto is an Assistant Professor at the Political and Social Sciences School at the National Autonomous University of Mexico. She earned a Ph.D. in Population Studies at El Colegio de México and a MSc in Population and Development from the Latin American Faculty of Social Sciences, Mexico chapter. Among her research topics is the inequality and exclusion in Latin American labor markets, mainly in Central America and Mexico. She has studied youth inclusion in labor markets and education in Mexico, El Salvador and Costa Rica. She co-coordinates the “Population and Work Network” from the Latin American Population Association

Chiara Galli is a Klarman Postdoctoral Fellow in the Sociology Department at Cornell University and an affiliate of the Center for the Study of Inequality. She received her Ph.D. in Sociology from the University of California Los Angeles in 2020. Situated at the intersection of sociology and legal studies, her research examines unaccompanied child migration and U.S. migration and asylum policy. She is currently working on a book project based on her ethnographic fieldwork in Los Angeles that traces Central American unaccompanied minors’ experiences as they navigate applications for asylum and other forms of humanitarian immigration relief in the U.S., with the help of immigration attorneys. Her research has been published in Social Problems, Journal of Ethnic and Migration Studies, and Ethnic and Racial Studies and has been generously supported by the National Science Foundation, the Haines Lindley Foundation, the P.E.O. Foundation, the California Immigration Research Initiative, and the Latino Center for Leadership Development.

Carolina Guadiana Sánchez holds a BA degree in Political Science and Public Administration from the Universidad de Monterrey in México.

Sandra E. Herrera-Ruiz is an Anthropologist from the Universidad de San Carlos de Guatemala. She holds a Master’s in social sciences from FLACSO and a PhD in Political Sciences from the Universidad Pontificia de Salamanca. She is the Coordinator of the Human Settlements Research Program of the General Directorate of Research of the USAC. She is an Undergraduate and graduate professor in various faculties such as Law and Social Sciences, Architecture, Agronomy and the School of History at the University of San Carlos de Guatemala. She is a director and advisor of thesis and research projects at universities in Guatemala, Mexico and the United States.  She has conducted more than 25 national and regional investigations, as well as several publications, on topics such as the Guatemala-Mexico border, women and international migration, the impact of remittances, seasonal agricultural work and the situation of children in border departments, among others. She has been a founding member of the National Roundtable for Migration in Guatemala. Outstanding University Woman and Researcher of the Year by the Instituto Universitario de la Mujer of the Universidad de San Carlos de Guatemala.

Claudia Masferrer is an Associate Professor at the Centre for Demographic, Urban, and Environmental Studies and Coordinator of the Seminar Migration, Inequality and Public Policy at El Colegio de México. Claudia holds a PhD in Sociology from McGill University and an MSc in Statistics from the University of Texas at Austin. Her research focuses on internal and international migration, reintegration of returnees, immigrant integration and family dynamics, inequality, and how policy mediates these processes. Her scholar research has been published in academic journals (Demography, Advances in Life Course Research, Population Research and Policy Review, Revista Latinoamericana de Población), as policy briefs, and as book chapters in edited volumes.

Liliana Meza-González is a researcher at the National Institute of Statistics and Geography (INEGI) in Mexico and a part-time professor of Economics and Migration at Universidad Iberoamericana. She holds a bachelor’s and master’s degrees in Economics from the Instituto Tecnológico Autónomo de México and master’s and PhD degrees in Economics from the University of Houston. Liliana Meza has published more than 50 works related to the Mexican labor market, public policy and international migration. She has been a full-time professor and researcher at Universidad Anahuac and Universidad Iberoamericana, where she coordinated the Migration Issues Program.

Ken Nishikata studied International Business and Economics in Sophia University, Tokyo Japan and holds a MA in Migration Studies at the University of San Francisco, USA. He has worked at the Central American Bank for Economic Integration in Honduras as well as Oxfam, a Non-Governmental Organization in El Salvador. He conducted community health research as a student in Santa Clara University in the Washington Community in San Jose, California. He currently works as a Japanese bilingual business immigration paralegal at SW Law Group, in Fremont, California.

Lesbia Ortiz Martínez is a researcher at the Institute of Historical, Anthropological and Archaeological Research of the School of History, San Carlos University of Guatemala, since 1988. She coordinated the Institute between 2003 and 2007. She was President of the Central American Network of Anthropology from 2010 to 2013 and Vice President of the Coordination Board of the National Roundtable for Migration. Her most recent research has analyzed US Migration Policies and their impact on Guatemalan migration, the mothers of disappeared migrants, unaccompanied Guatemalan migrant children, deported Guatemalan migrant youth, as well as the recovery of the memory of the massacre of Guatemalan migrants in San Fernando Tamaulipas, Mexico 2010.

Martha Luz Rojas Wiesner holds a PhD in Social Science with a specialization in Sociology from El Colegio de México. She is a Senior Researcher at the Society and Culture Area of El Colegio de la Frontera Sur (ECOSUR) in San Cristobal de Las Casas, Chiapas, Mexico. She conducts studies on women migration and Central American migration on the southern border of Mexico on issues related to social vulnerability, precariousness and migration, as well as the inclusion and exclusion of migrants.

Jesús Rubio Campos holds a PhD in Public Policy and a MA in Public Administration and Public Policy from the Tecnológico de Monterrey. He is an Economist from the Autonomous University of Nuevo León. He has been a part of the Mexican National Research System since 2012. His specialty is public policy analysis. He is currently a senior research professor at El Colegio de la Frontera Norte A.C. in México.

Javier URBANO REYES is a  Research Professor at the Department of International Studies, Universidad Iberoamericana, Mexico City and scholar at the Faculty of Political and Social Sciences of the National Autonomous University of Mexico (UNAM). He participates actively in various social and governmental initiatives that protect and promote the human rights of migrants. He is a member of various international organizations dedicated to studying migration, such as the Iberoamerican Observatory on Human Mobility, Migrations, and Development (OBIMID), at the Universidad Pontificia, Comillas, Spain. His most recent research works are International Migration in the 21st Century. Four debates on a constantly changing phenomenon (UIA, 2015), and Migration and Development. Proposals for Alternative Migration Management in Mexico (UIA,2020).

Ana Vila-Freyer holds a PhD in political science from Université de Montréal and is a professor and researcher at Universidad Latina de México. Her research focuses on composed identities and multiple belongings developed by young Mexicans settled regularly or irregularly in the US or returning to Guanajuato, central Mexico. She has been part of the Mexican National Research System (SNI) since 2017, of the scientific committee of The Migration Conference and of the editorial board of Migration Letters.