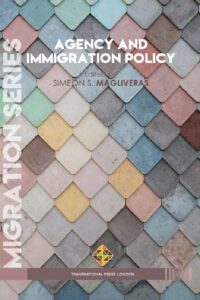 Immigration policy is interesting because seemingly powerless immigrants bare much of the brunt of said policies. Cultural idioms of us/them are unashamedly politicized at the expense of immigrants. Issues such as citizenship, human rights, labor rights, needs for laborer, culture and identity, all are intertwined into immigration policy. Policy, thus, becomes a tool of control and power. Moreover, immigrants and refugees are essentialized in everyday discourse as either hard working labors, or as lazy or immoral groups. They are politicized as barbarous caravans, or simply hordes of otherness. Immigrants are voiceless and at the same time burdened with all the ills of the host society. Much of the time, voices of their contributions are drowned out by the voices of fear and invasion. And this is inadvertently embedded in policy and its interpretations. This book is a selection of work from different places around the globe. It examines immigration and policy from different perspectives. Contributors to this book explore the intention of policies, its causes, and the results of its enactment, to society’s transformation but also it explores the action and agency of the subjects of said policies.

Simeon S. Magliveras, PhD, is an Assistant Professor of Socio-cultural Anthropology in the Department of Global and Social Studies at the King Fahd University of Petroleum and Minerals, Saudi Arabia. He has done research and written about Greece and Albania, Southeast Asia, Laos and the Philippines, as well as, the Kingdom of Saudi Arabia. The general focus of his research has focused on movement of peoples resulting from political and economic upheavals and how ethnic and national identities are navigated and affected by the act of migration for both host and guests. His research also explores how transnational identities are maintained through collective memory, food and the senses.

Yahya Almasri is an Assistant Professor at the University of Hyogo, School of Economics and Management. His main research interests are in forced migration and Middle Eastern politics. He played a significant role in shaping the Japanese response to the higher education crisis in Syria in 2016 as one of the alternatives to refugee resettlement. Yahya is frequently invited to Japanese universities and high schools as a guest speaker.

Pavithra Jayawardena currently is a doctoral researcher at the Victoria University of Wellington, New Zealand. She is also a lecturer at the Department of International Relations, University of Colombo, Sri Lanka. Her research interests include migration, citizenship, Sri Lankan diaspora and diaspora relations with sending countries.

Georgia Lagoumitzi is Associate Lecturer in Sociology at the American College of Greece. She has taught a number of courses including collective behavior and social movements, the sociology of globalization, and supervises the senior thesis seminar. She has organized various conferences in Sociology and has been a member in the organizing committees of numerous others. She regularly contributes papers to conferences organized by the Hellenic Sociological Society (HSS). She presented papers on the Greek Diaspora in Oxford (2010), Athens (2013) and Bari (2019). She has presented papers in the American Studies Seminar, organized jointly by The American College of Greece and Panteion University (2011, 2019). Her publications include: “The Uses of Nostalgia in the ‘Imagination’ of the Diaspora: The Case of the New Pontic Greek Refugees” in Marianne David and Javier Muñoz-Basols (eds.), Defining and Re-defining Diaspora: From Theory to Reality (2011), “The Role of Public Sociology in the Pos-Truth Era”, 6th HSS Conference Proceedings – e-book (2018)

Jera Lego is an independent researcher currently on semi-hiatus to raise a family. Her research interests include refugee politics, international organizations, and politics and international relations in Southeast Asia. Previously she was a research associate at the Asian Development Bank Institute, a lecturer in the Comparative Politics of Southeast Asia, and a foreign affairs research specialist at the Center for International Relations and Strategic Studies at the Philippine Foreign Service Institute. She holds a PhD in Politics and International Relations from the International Christian University in Tokyo, Japan where she wrote her dissertation exploring themes of sovereignty, governmentality, and ambiguity in constructing the refugee category in the absence of national asylum frameworks in Southeast Asia.

Mathew Mathews, PhD, is Head of IPS Social Lab, a centre for social indicator research and a Senior Research Fellow in the Society and Culture Department at the Institute of Policy Studies, National University of Singapore. To date, Mathews has been involved in over forty research projects, most of them relating to issues in societal cohesion. These have included research using both quantitative and qualitative methods on areas such as race, religion, immigrant integration, family, ageing and poverty. Mathews also studies the impact of social programmes on social issues and has been involved in a number of evaluations on the usefulness of various government initiatives. He has taught courses on social policy and has published in a range of academic and media outlets.