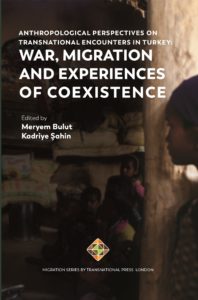 Anthropological Perspectives on Transnational Encounters in Turkey: War, Migration and Experiences of Coexistence

This book includes studies conducted on the basis of field research by academics specialised in social anthropology in various universities in Turkey. Anthropological studies on migration date back a long way. Leaving their desk in the office, anthropologists have taken to the field, placing participatory observations and in-depth interviews at the centre of their research. The story of this book emerged from the thoughts of anthropologists, who had made presentations on migration, coming together during a symposium and discussing how to write about such a topic. A qualitative research method was used in work containing examples from Ankara, Istanbul, Burdur, Van, Ardahan, Sivas and Hatay. The focal groups had been displaced and/or had witnessed war.

This book is composed of eleven chapters. The majority of the studies were conducted with the participation of Syrian immigrants. The wave of compulsory emigration from Syria due to the continuing conflict in the country has affected Turkey deeply. Syrians under temporary protection have been living in almost every Turkish city since the early years of the war. The book also includes papers on groups who have come from Iraq, Afghanistan and Somalia to Turkey, settling in various places in the country, in addition to Syrian immigrants.

CHAPTER 4 – “THE GUEST DOESN’T LIKE ANOTHER GUEST, AND THE HOST LIKES NEITHER” : SOMALI REFUGEES FORGOTTEN IN A SATELLITE TOWN
Ayşe Yıldırım

CHAPTER 10 – MIGRANT WOMEN IN VAN: HOME AND DAILY LIFE AS A REFLECTION OF BELONGING
Berivan Vargün

CHAPTER 11 – THE CUISINE OF UZBEKS WHO EMIGRATED FROM AFGHANISTAN TO OVAKENT (HATAY): PRESERVED, CHANGED AND REMEMBERED
Kadriye Şahin

Dr Meryem Bulut, the editor of this volume, is Associate Professor in Anthropology at the Faculty of Language, History and Geography in Ankara University. She received her degree from the Social Work and Social Services Department of Hacettepe University and her MA and PhD degrees from the Department of Social Anthropology at Ankara University. Her research focuses on gender, Criminal Anthropology, Medical Anthropology, ethnicity, identity, changes/transformations in the rite of passage, and international migration. She has published widely on these topics in various journals. She has participated in national and international research projects on immigrants in Turkey fleeing conflicts elsewhere. She has published three books on domestic violence against children, biography, and identity and rituals. Her research has mainly been based on qualitative fieldwork while she has also used oral history as a method. She has edited several books Social Sciences while also being the editor of various journals in the fields of Folklore/Literature, Anthropology and Humanities.

Dr Ceren Aksoy Sugiyama is Associate Professor of Anthropology at the Faculty of Language, History and Geography in Ankara University. She studies on such issues as gender, embodiment and anthropology of tourism with a focus on Japan.

Dr Aylin Eraslan is a lecturer in the Department of Anthropology, at the Faculty of Letters at Hatay Mustafa Kemal University. Ethnicity and nationalism, gender and international migration are her areas of study.

Dr Oya Topdemir Koçyiğit obtained her BA, MA and PhD degrees from Istanbul University, Department of Anthropology. She is a research assistant in the Department of Anhropology at the Faculty of Letters in Istanbul University. She has done post-doctoral studies in Karl-Franzens-Universität Graz, Austria. Her research areas are transnational marriages and families, cultural transfer, memory and identity construction, comprehensions on health and diseases, infertility, reproductive technologies and IVF.

Dr M. Fuat Levendoğlu is a research assistant in Social Anthropology at the Department of Anthropology of the Faculty of Letters at Van Yüzüncü Yıl University. His research is on mainly cultural identity, oral history, folk dances and Ethno-Archaeology.

Dr Süleyman Şanlı is a lecturer in the Department of Anthropology, Faculty of Science and Letters at Mardin Artuklu University. His areas of research include Jewish culture, Ottoman Jews, Jews in Turkey, immigration, Anthropology of the Middle East, Middle Eastern Studies and Social and Cultural Anthropology.

Dr Ayşe Yıldırım is a lecturer in the Department of Anthropology, Faculty of Science and Letters at Burdur Mehmet Akif Ersoy University. She studies Political Anthropology, political borders, ethnicity, migration, and kinship and tribal organisation.

Dr Berivan Vargün is a lecturer in the Department of Sociology, Faculty of Humanities and Letters at Ardahan University. Subjects such as rites of passage, traditions and customs, cultural symbols and gender are among her research areas.

Seher Çataloğlu is a PhD student in the Department of Anthropology, at the Social Sciences Institute of Ankara University. She studies migration and ageing.

Ünsal Karbuz holds a post-graduate degree in Social and Cultural Anthropology from the Department of Anthropology at Cumhuriyet University. His current research focuses on masculinity, gender, city and culture and personality.