Something is Missing – Things We Don’t Want to Know About Love, Sex and Life 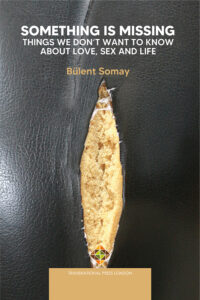 Things We Don’t Want to Know About Love, Sex and Life

“These essays (aphorisms, theses, whatever you like) were written fifteen years ago in Turkish, and were published in Turkey in 2007. It was almost an idyllic, Arcadian time if considered from the point of view of today, that is, the nightmarish year 2020 when I am writing this. Trump was still your run-of-the-mill Reality TV star (who was also a millionaire), and could harm only his immediate environment. We only had to deal with the common cold and the flu, which, although deadly enough, could not even begin to compete with the Covid-19 pandemic. Turkey, Russia and India were ruled by populists with authoritarian tendencies even then; but their rule did not seem as eternal and as aggressively autocratic, bordering on fascism, as it is today.”

* The original book was published in Turkish titled “Bir Şeyler Eksik” by Metis Publishers, Istanbul, 2007. This English version is translated and printed by permission from the publishers.

What a joy! Bülent Somay’s new-old text, translated from the Turkish by Bülent himself, takes us into the impenetrable heart of obscure Lacanian psychoanalysis and comes out with clarity, wit and epithetical precision. Theory comes alive here; and along with the fun and games, something dark is brought into the light.

– Stephen Frosh, author of Feelings, Psychoanalysis Outside the Clinic, Hauntings and Those Who Come After)

With clarity, wit and copious erudition, Bülent Somay brings his critical psychoanalytic eye to our most challenging human relations – the tribulations of sex, love and desire. Somay’s committed sexual politics informs this essential addition to our knowledge of the pleasures and perils of the bonds of desire. Something is Missing is not to be missed.

Bülent Somay is born in Istanbul and has BA and MA degrees in English Language and Literature, and holds a PhD in Psychosocial Studies. He was a Lecturer in Comparative Literature and Cultural Studies in Istanbul Bilgi University between 2000 and 2017. He has published seven books in Turkish (Cinselliğe Dair Vazgeçmemiz Gereken Yüz Efsane [A Hundred Myths on Sexuality We Need to Give Up], 2016; Tarih, Otobiyografi ve Hakikat [History, Autobiography and Truth], 2015, ed.; Çokbilmiş Özne [The Subject Who Knows Too Much], 2008; Bir Şeyler Eksik [Something is Missing], 2007; Tarihin Bilinçdışı [The Unconscious of History], 2004; Şarkı Okuma Kitabı [Song Reader], 2000; Geriye Kalan Devrimdir [What Remains is the Revolution], 1997), and two books in English (The View from the Masthead, 2010; The Psychopolitics of the Oriental Father, 2014). His most recent publication is ‘The Three-Mother Problem’ in the October 2019 issue of Journal of Psychosocial Studies. He is recently living in exile as an Academy in Exile fellow in Freie Universität, Berlin.