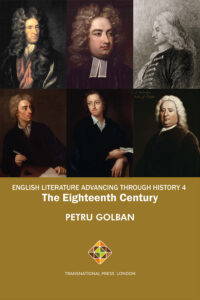 With Theoretical Introduction and Preliminaries

It appears that literary work possesses eternal temporal validity due to its autonomous aesthetic value, whereas criticism provides points of view having temporary and transitory significance. Despite such claims, the vector of methodology in our series of books, dealing with the history of English literature, relies on Viktor Shklovsky, T. S. Eliot, Mikhail Bakhtin, and especially Yuri Tynyanov, whose main reasoning would be that literature is a system of dominant, central and peripheral, marginalized elements – to us, “tradition” (centre) versus “innovation” (margin) engaged in a “battle” for supremacy, demarginalization, and the right to form a new literary system – and the development or historical advancement of literature is the substitution of systems. Roman Jakobson and French structuralism, on the whole, later Linda Hutcheon, with her “system” and “constant”, and Bran Nicol with the “dominant”, to say nothing about Itamar Even-Zohar and his theory of polysystem, to a certain extent Julia Kristeva, and even Homi Bhabha – as well as our humble contribution, we would like to believe – maintain Tynyanov’s line of thinking and concepts alive, which have developed and emerged nowadays more like a kind of “neo-formalism”. Focusing on literary practice, applying critical theory and emerging from within our own teaching experience, the books in the present series are theoretical and surveyistic, like a monograph, whereas their more practical and text-oriented aspect should appeal as a student handbook for didactic purposes, in which certain literary works belonging to various writers of different trends, movements, and periods are analysed and compared with regard to their source, form, thematic arrangements, ideas, motifs, character representation strategies, intertextual perspectives, structural or narrative techniques, and other aspects.

Petru Golban Petru Golban holds a PhD in English and American literature from Al. I. Cuza University of Iasi, Romania. He currently teaches literary theory and English literature-related classes at Tekirdag Namik Kemal University, Turkey. He is also the author of some 70 critical studies, including 11 books, among which A History of the Bildungsroman: From Ancient Beginnings to Romanticism (2018) and Victorian Fiction as a Bildungsroman: Its Flourishing and Complexity (2019). His research concerns encompass particular aspects of English literature, comparative literary studies, and literary theory and criticism.