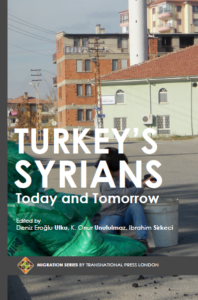 Since the first arrival of Syrian refugees, the issue has sparked considerable national and international interest. Political discourses concentrated on state ‘generosities’ to provide protection to those coming from insecurities and possibilities to reduce ‘burden of refugees’ to receiving countries via international solidarity. While these concerns focus on effects of hosting refugees, what happens to refugees themselves, how they are affected by government policies and how they are perceived by host country people are questions yet to be answered. This book brings together a multidisciplinary set of contributions scrutinising the case of Syrian refugees in Turkey.

Dr Deniz Eroğlu Utku is Assistant Professor in the Department for Public Administration in Trakya University and former deputy director of the Institute for Roman Language and Culture, Trakya University, Edirne, Turkey. She holds a PhD and a Master degree in Government Department at the University of Essex.

Dr K. Onur Unutulmaz is currently the Deputy Head of Department of International Relations, Social Sciences University of Ankara, Turkey. He received his doctorate from the University of Oxford in Social and Cultural Anthropology.