Beyond ISIS: History and…

Beyond ISIS: History and Future of Religious Minorities in Iraq 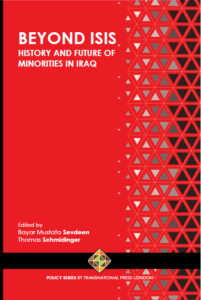 Beyond ISIS: History and Future of Religious Minorities in Iraq

“The issue of existential threats against the remaining religious minorities in Iraq became dramatically important in June 2014. The so-called ‘Islamic State’ (ISIS) occupied one-third of the territory of present-day Iraq and advanced towards the Kurdistan region through the province of Mosul, the base of most religious minorities. The ISIS undertook systematic ethno-religious cleansing of this borderland between the Kurdistan region and the central government in Baghdad. The area was mainly populated by Christians and Yazidis and had been the last resort for most religious minorities in the country. The United States government and United Nations agencies reported the murders of about 9,000 people, the abduction of 6800 (one-third of them still missing in January 2019), and about 400,000 displaced in the Kurdistan region. Prior to 2005, about 700,000 Yezidis lived in Iraq; after August 2014, less than 500,000 Yezidis remained. In January 2019, most still live in refugee camps. Since 2005, the number of Christians has decreased from an estimated 1.4 million to less than 300,000 in 2017, mostly in refugee camps in the provinces of Kurdistan. Besides the Christians, also Shabak and Kaka’i, also called Yarsan or Ahl-e Haqq, were displaced by the occupation of the Nineveh Plains by the ISIS.”

“I can confidently recommend this up-to-date, fascinating collection of articles authored mainly by new Kurdish and European scholars on Iraqi Kurdistan’s post-ISIS, religious minorities including Christians, Jews, Yazidis, Shabaks, Kakais, Bahais, and Zoroastrians, as well as labor migrant Hindus and Buddhists, among others.”

“We have to pay attention to the situation of the people in Iraq. Iraq heavily suffered under the aggression of the so-called Islamic state (ISIS) and the war with these jihadi terrorists. In this very area, the worn-out and often misused term ‘free world’ suddenly gains a new elementary meaning, because it is the place where our freedom is vindicated. The henchmen of the ISIS set back Mosul by centuries. As if there had never been a declaration of human rights, a Hague convention, or an abolition of slavery. A group made up of ideologically deluded extremists gone mad disregards every human accomplishment in terms of civilisation.”

Birgit Ammann is Professor of Political Science at the University of Applied Sciences Potsdam and Research associate at the Berlin Society for the Advancement of Kurdish Studies – European Center for Kurdish Studies.

Lana Askari has a PhD in Social Anthropology with Visual Media from the Department of Anthropology at the University of Manchester. She is also a movie director. Her background from a Haqqa family gave her close access to research material about the Haqqa movement.

Ghazwan Youssef Baho is a Chaldean priest and a professor at Babel College for Philosophy & Theology in Ain Kawa (Erbil, Iraq). His research on the Christian religion in Kurdistan, published recently in the book entitled Religions in Kurdistan, Misbar Publishing House, Dubai 2018.

Matthew Travis Barber is a PhD student in the Department of Near Eastern Languages and Civilizations at the University of Chicago, studying Islamic thought and modern Middle Eastern history. He has worked extensively with minorities in Iraq, in particular with the Yazidis as a proponent of the humanitarian and advocacy response to the Yazidi Genocide. He served for one year as the first executive director in Iraq of Yazda, a multi-national Yazidi organization, developing humanitarian, advocacy, and social outreach programs.

Seda D. Ohanian was born in Basra, Iraq. She is a researcher at the Armenia’s National Academy of Sciences, Division of Armenology and Social Sciences at the Institute of History. She has published extensively on the Armenians in Iraq.

Saad Salloum is Assistant Professor of Political Science at the University of Mustansiriya and an expert on religious diversity in Iraq. He serves as the general coordinator of the MASARAT foundation for Cultural and Media development and helped found the Iraqi Council for Interfaith Dialogue. In 2018, he was awarded the Stefanus international prize, in Oslo and the Kamil Shiaa’s prize for Enlightenment in Baghdad and the Chaldean Patriarchate Award.

Thomas Schmidinger is Lecturer for Political Science at the University of Vienna and for Social Work at the University of Applied Sciences Upper Austria. He is secretary general of the Austrian Association for Kurdish Studies and Co-editor of the Vienna Kurdish Studies Yearbook. His recent books are about Rojava, Afrin and the Genocide against the Yazidis in Sinjar. Foreign Policy advisor on Kurdish issues, minority questions, Middle East for S&D Vice President Josef Weidenholzer in the EU parliament.

Bayar Mustafa Sevdeen is Assistant Professor and researcher at the College of international Studies at the American University of Kurdistan (AUK), he is also AHDA fellow at the Institute of the Study of Human Rights at Columbia University. He served as a diplomat in the Turkey Division at the Iraqi Ministry of Foreign Affairs from 2010 to 2013. Currently, he is a principal investigator in ongoing projects focusing Yazidi and other religious groups in the Middle East, in cooperation with LSC and UCF. He is also working on his latest book entitled Contemporary Politics of Kurds and Kurdistan.

Michiel Leezenberg is associate professor at the University of Amsterdam in the Department of Philosophy. He coordinates the Research Masters in Philosophy and the B.A. honours program in philosophy, and participates in the M.A. program Islam in the Modern World. Leezenberg is also a well-known specialist on Kurdish Studies and particularly the Shabak.

Arzu Yilmaz was Chair of Department of International Relations at American University of Kurdistan based in Duhok and IPC-Mercator Fellow at the German think tank SWP. She obtained her PhD in International Relations from Ankara University in Turkey, where she wrote her dissertation on Kurdish refugees and the political identity of the refugee agent.

Archimandrite Emanuel Youkhana is a priest (Archimandrite) of the Assyrian Church of the East and president of CAPNI (Christian Aid Program Northern Iraq) based in Duhok.