Communication of Migration in…

Communication of Migration in Media and Arts 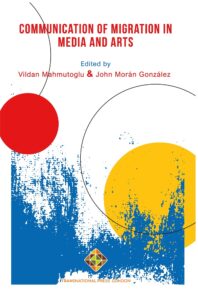 Communication of Migration in Media and Arts

“The main function of traditional media is to provide timely information to the public, but today, traditional media cannot fulfill these expectations with regard to the fluid nature of global migration. New digital media technologies such social media have arisen to fill the void, narrating the lives of migrants in artistic terms that bear the traces of the major social issues of migration. In this critical anthology, contributors examine the intersection of migration, art, and media studies in order to critically analyse the impact of their confluence upon migrant and receiving communities.”

Balca ARDA is Department Chair and Assistant Professor of Visual Communication Design at Kadir Has University, Istanbul. Her dissertation “The Sublime in Contemporary Art and Politics: The post-9/11 Art of the Middle Eastern Diaspora in North America” (York University, Toronto – 2016), builds on aesthetic and communication theory together with an ethnographic study in diasporic and postcolonial literature. Her latest publications are “Contemporary Art on the Current Refugee Crisis: The Problematic of Aesthetics versus Ethics” (2019) in the British Journal of Middle Eastern Studies and “Cinematic Visual Representation of Refugee Journeys in Turkey in the Context of Precarious Class Dynamics” (2020) in Migration Letters. Balca worked as the illustrator for Davetsiz Misafir [The Uninvited Guest], an intellectual magazine of comics, science-fiction, cinema, and critique in Turkey. Her recent art exhibitions were in Cedar Ridge Gallery in Toronto and Gallery MCRD in Istanbul. She was awarded Dwight Conquergood Award in 2019 by the Performance Studies International for her research with disenfranchised communities.

Gabriela ABRASOWICZ holds a PhD in Slavic Philology from Wrocław University. Her dissertation about contemporary women-dramatists in Serbia and Croatia was prepared under the supervision of Prof. Magdalena Koch. She is the author of Body Drama, The Body in The Drama. The Work of Serbian and Croatian Women Playwrights in The Years 1990-2010 as well as a series of articles dealing with the question of analysis of post-Yugoslav drama writing and theatre from the perspective of anthropology of the body, gender studies, and transcultural studies. Presently, she is carrying out a research project titled, “(Trans)positions of Ideas in Croatian and Serbian Playwriting and Theatre (1990-2020): A Transcultural Perspective” under the auspices of the National Science Center, Poland.

Eric TRINKA (Ph.D., The Catholic University of America) is an award-winning biblical scholar who works at the intersections of the topics of religion and migration in both the ancient and modern worlds. He writes on the history of biblical composition, ancient Near Eastern history and religion, the use of the Bible in the modern world, and on a wide range of issues concerning the place of religion in the migration experience.

Bianca-Florentina CHEREGI is an Assistant Lecturer at the College of Communication and Public Relations at the National University of Political Studies and Public Administration in Bucharest, Romania. She is also a postdoctoral researcher on “Labour Market in the Fields of Intelligent Specialization,” sponsored by the National University of Political Studies and Public Administration (CERT-ANTREP). She is also a program coordinator in Brand Management and Corporate Communication and was a “Spiru Haret” fellow during the academic year 2017-2018. Her latest publications include a monograph titled Nation Branding in Post-Communist Romania. A semiotic approach (comunicare.ro, 2018). Her published book chapters include “The Media Framing of Migration in Sending and Receiving Countries: The Case of Romanians Migrating to the UK” (London, Palgrave MacMillan, 2018), “Let’s Change the Story!” – Nation Branding and Interactive Media Campaigns on Romanian Migration” (UK, Cambridge Scholars Publishing, 2017). Her academic interests include migration, media framing, nation branding, public diplomacy, digital ecosystem, country image, and visual semiotics.

Bilgen TÜRKAY is a first-year PhD student at the University of Cincinnati in the Political Science Department. She previously completed an M.A. in Journalism at Ankara University; her thesis topic was: “Syrian Refugees, Social Media and Civil Society: Integration Process and Seeking for Solutions.” She has two undergraduate degrees in International Relations, and Public Relations and Advertisement, respectively. Her research interests are immigration, social media & technology, human rights, and national security.

Barış ÖKTEM is currently a PhD candidate in Middle East Politics at the University of Exeter. Barış is completing a dissertation titled “Reformulation of Colonialism and Its Effects on Refugees: The Comparative Case of Syrian Refugees in Turkey, Greece and Germany.” He obtained his bachelor’s degree at Anadolu University in Turkey in 2012, and afterwards, he was rewarded a full-time scholarship for graduate study abroad by the Turkish Ministry of Education. He earned a master’s degree after studying Sociology at the University of Essex in 2016. His research was focused on the “Radical Democracy and Democratic Nation” concepts of political representation, with a specific interest in political parties in Turkey. Barış has academic interests in colonialism, migration, Syrian refugees, social media studies, and Kurdish politics. He is a freelance journalist working for British Broadcasting Company (BBC), an amateur musician with interest in percussion instruments, and an active sportsman.