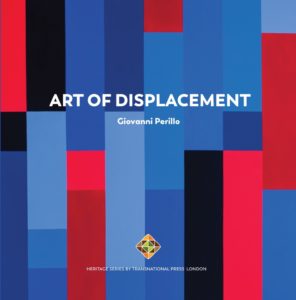 Print copies:
ISBN: 978-1-912997-31-2 (paperback) | Buy from Lulu | Buy from Amazon
ISBN: 978-1-912997-32-9 (hardcover) | Buy from Lulu
Digital/ebook version: Buy on Amazon Kindle | Buy on GooglePlay | Buy on CEEOL
In his artistic research, Giovanni Perillo aims to generate conflicts with oneself, to weaken certainties, stereotypes and rigid expectations, encouraging a dialogue to express one’s reflections on the real freedom of one’s choices and on the possible influences that they imply. Through a détourner, a displacement, a deviation from alienating cultural mechanisms, aesthetic experimentation can become practical for a transformation towards a different self-awareness.

“Taking the cue from the theory of events, I started to research stimuli and creative interaction processes through my artistic investigation and production. The stimuli had to be able to arouse behaviours and interpretations that are far from conformist and pre-established models.

The interpretations, as answers to a stimulus coming from reality, are the significant consequences of the sense and vision of reality.

The conventional and conformist interpretations form the specific psychological structure of a culture, and for this reason, they are its identity.

If the reactions of the individuals who interact with artwork were not spontaneous, heterogeneous or unpredictable, they would show the homogenized and homogenizing game of taking part to practices where roles and goals of the players are pre-establish and reinforce a system of perception of reality that is influenced by dominant socio-cultural models.”
– Excerpt from the Introduction by Giovanni Perillo

In Art of Displacement, Giovanni Perillo establishes a new and important dialogue around ethnicity, displacement and migration. Spanning the arts as well as the social sciences—and in particularly psychology—Perillo asks us to take a leap of faith. He wants us to leave the comfort of our academic homes and to escape our “ivory towers” and consider what displacement means. Establishing his discussion in a project he calls “the Aesthetics of Migrations,” Perillo pushes boundaries, challenges assumptions.

The French philosopher/sociologist Pierre Bourdieu argued that human life is organized around habitus or the ingrained habits, skills, and dispositions that we possess, that are grounded in life experience; and that organize our response to the world around us. Habitus is powerful and creates an assumption of the natural order that becomes real as it is shared and used to organize beliefs, laws and social rules. Perillo helps us recognize how a Western habitus limits and restricts our ability to connect; in fact, he goes so far as to argue our shared habitus, embodied in the maps we create, fragment our world and the people in it in ways that drive stereotypes, prejudice and the rise of nationalistic xenophobia we see today.