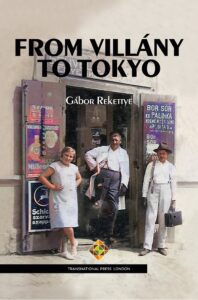 “I was born at the end of World War II, and so I was young in the ’60s. This means that I belong to the so-called (at least in Hungary) ‘great generation’. Young people of this generation, especially in America and Western Europe, rebelled against the existing system, showing their dissatisfaction by protests, new types of music and by outrageous clothes and behaviour. We – here and in the other socialist countries – experienced this, only because of the limitations of the repressive system, in a much gentler way.  I have never been a rebel myself, and yet what tied me to this great generation was my desire to know the world much better, to be more informed than the average, to be a real cosmopolitan. That is why I studied languages and travelled much more than most.”

“The evolution of people’s lives can be very diverse. Many people ask what makes someone successful or less successful. Genetics, education, its narrower and broader environment, circumstances, luck, etc. can all influence the evolution of an individual’s life. Success itself is subjective. Success can be material and not material, and the measurement of success always contains a kind of comparison to someone else. The concept of happiness further complicates this already very complex issue.

I would say that success comes hand-in-hand with satisfaction. If people are satisfied with what they have achieved, they can claim to be successful and vice versa. Full satisfaction, of course, can be very misleading. People’s ways of life are very similar to a product’s life-cycle curve, as taught in marketing. Birth is followed by youth, then early adulthood, mature adulthood and ends with ageing.”

Gábor Rekettye is a Professor Emeritus at the Faculty of Business & Economics, Pécs University, and he is an honorary professor at Szeged University. He received his master’s degree at the Budapest University of Economics, and his PhD at the Hungarian Academy of Sciences, both in economics. Dr Rekettye is the author of several textbooks, which are taught at different Universities in Hungary. In addition, he has written over 300 publications in Hungary and abroad. His latest book co-authored by Professor Jonathan Liu about pricing was published last year in London. He was working in the industry, in foreign trade and for five years he has served as commercial counsellor of Hungary in Tokyo, Japan. Between 1993 and 1996, he was the Dean of the Business School at the University of Pécs. For 16 years, between 1993 and 2009 he was heading the Marketing Department of the School. He has served as Chairman of the Hungary Japan Economic Club, as chair of the Hungarian Association of Marketing Educators, as chairperson of the Editorial Board of the Hungarian Journal of Marketing & Management. Gábor Rekettye received the highest scientific title in Hungary, ‘The Doctor of the Hungarian Academy of Sciences’ in 2003. In 2005, he was elected to Chairman of the Committee of Marketing Science at the Hungarian Academy of Sciences. He was decorated by the President of Hungary with the Hungarian Order of Merit Officers Cross in 2013.